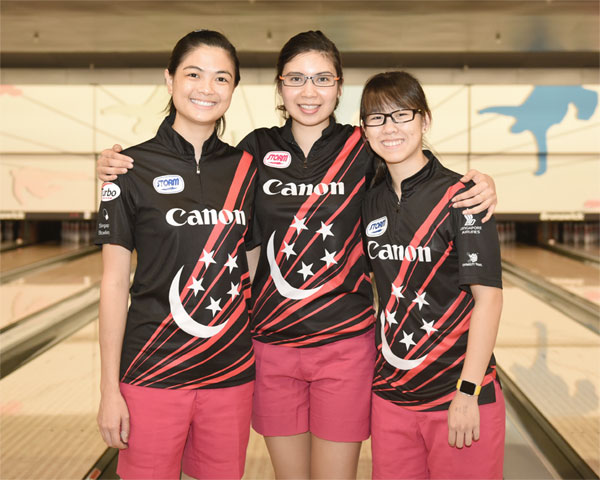 Team silver medallist, Shalin Zulkifli of Malaysia set the early pace with a win in her first match over team-mate, SIn Li Jane 235-217 to take the lead followed by Esther Cheah, who beat her team-mate, Syaidatul Afifah, 227-223.

But the 2015 Bowling World Open champion shot the highest game of the block to defeat Cheah, 266-204 to take over the lead. Team gold medallist and triple silver medallist, Baek Seung Ja of Korea won her first match and lost her second to trail Yeo by one pin.

Shalin regained the lead after the third match before Yeo bounced back with another win in her fourth match to retake the lead followed by triple gold medallist, Jung Da Wun of Korea in second.

Joey Yeo finishing a good second in the first block

Yeo held the lead for another game with a win in her sixth match but Baek moved ahead of Yeo after rolling a big game of 278 in the seventh match. Although the Korean lost her eighth and final match of the block, she went on to claim pole position with 1853 from a total of six wins.

Jasmine rounded out the top five with 1768 but only winning four out of the eight matches contested. Daphne ended in the top ten in ninth position with 1727.

Meanwhile, Japan’s Shogo Wada topped the men’s division with 1882, two pins ahead of triple gold medallist, Michael Mak of Hong Kong in second with 1880. Tomoyuki Sasaki of Japan took third spot with 1844. No Singapore men made the finals.

The finalists will resume with another seven matches after which a position-round match will be played to determine the top three men and top three women advancing to the TV finals for the final gold medal of the championship.