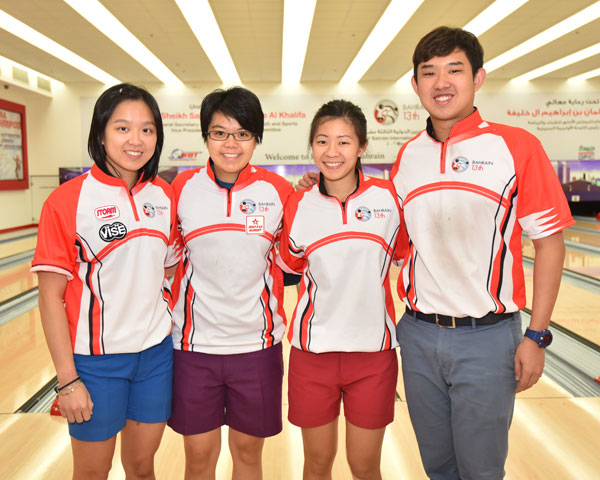 6th March, Sitra, Bahrain: Bernice Lim, Jazreel Tan and Cherie Tan survived the cut in Round 3 finals of the PBA-WBT #9 13th Kingdom of Bahrain Open to progress into Rond 4 finals at Ozone Entertainment Centre on Friday.

Rakan Al Ameeri of Kuwait, who was second to Svensson in Round 2 earlier, got off the mark with a superb 244 to lead Michael Mak of Hong Kong by 18 pins. Jazreel Tan of Singapore, who had a poor start with 187, recovered with a sizzling 279 to take over the running.

Svensson, who also had a slow start with 202, stepped up a gear with a stunning 266 but had to trail Jazreel by 12 pins in second with a second Singapore women, Cherie Tan in close company.

Cherie moved into the lead at the halfway mark ahead of her team-mate, Jazreel in second but Svensson moved 15 pins ahead of Jazreel after the fourth game.

The two-handed lefty added 236 in the fifth before firing another stunning 279 to win the round with 1423. Danielle McEwan, who scrap through to this round in sixth in the earlier round, took second spot with 1313, 110 pins adrift.

A third Singapore women, Bernice Lim got the better of her compatriots to snatch third spot with 1287 and Jazreel settling for fourth position with 1242.

American PBA pro, Wes Mallot of Pflugerville, TX survived to take up fifth position with 1274 while Cherie slipped down to claim the sixth and final spot for the next round with 1266.

A second American PBA pro in the finals, Brad Angelo of Lockport, NY., was less fortunate this time round, missing the cut by 37 pins in seventh position. Mak also crashed out in eighth and Rakan, Andres Gomez of Colombia and Muhammad Jaris Goh of SIngapore all failed to progress.

The top 6 will join qualifiers positioned 7 to 12 for another 6 games in Round 4 finals tomorrow morning at 9.00 am local time. The top 6 finishers togther with the top 6 seeded qualifiers will contest Round 5 finals at 3.00 pm.

The top 3 will then proceed to the stepladder shootout finals to determine this year’s champion and win the top prize of US$25,000 and a trophy. The first runner-up will take home US$12,500 and the second runner-up, US$8,000.