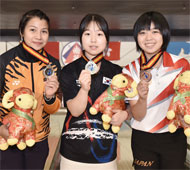 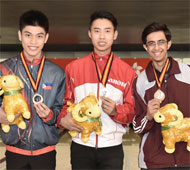 First block leader and top seed, Kuek got off to a flying start in the first of the two-games total pinfalls championship match with eight strikes-in-a-row leaving challenger, Ivan Malig of Philippines A stunned.

An early split in the Filipino’s first frame and another in the fourth frame, left Malig trailing his opponent by 83 pins as the Singapore took the first game, 268-185. It became a formality in the second game and Kuek cruised to a comfortable 203-183 to win the only gold medal for Singapore, 471-368.

Malig, who settled for the silver medal, had earlier defeated second seed, Jassem Al Murakhi of Qatar A, 216-183 in the semi-final match to advance to the title match.

The champion topped the second block round-robin Masters finals winning five matches which including the position-round match for a 16-match total of 3801 to advance as top seed.

Lim Seong Yul of Korea B, who was second, lost in the position-round to Kuek, 197-247 to miss the cut by two pins and ended in fourth position with 3641. Bader slipped to fifth with 3636.

Overnight second-placed, Alex Yu of Hong Kong A, finished seventh with 3586 while Aidah Poh of Singapore, who was fourth in the first block, ended in ninth position.

Meanwhile in the Girl’s division, it was heartbreak again for top seed, Nora Lyana Natasia of Malaysia when she lost the two-game title match to third seed, Kim Dong Yo of Korea A, 386-411. The Malaysian had settled for the Team and All Events silver medals but looked a top contender for the gold after topping the second block finals with 3666.

Undoubtedly, the star of the championships was the Korean champion, who had picked up the first gold in the Singles and helped Korea clinched the Team gold medal. She also earned a bronze in the All Events.

Kim, who was second before the position-round match, lost to Nora Lyana, 186-222 and nearly missed the cut for the stepladder finals.

Shion Izumune of Japan helped the Korean by beating Wakana Mizutani, 224-174 in the position-round match to advance in second with 3505 while Kim held on to third with 3467.

Doubles and All Events gold medalist, Kim Jun Ji of Korea B lost the position-round match to sixth-placed, Faten Najihah of Malaysia and failed to advance.

Kim sailed past Izumune, 243-193 in the semi-final match to meet the top seed. She took the first game, 215-190 and despite tieing the second game with 196, the 25 pins cushion she had from the first game, sealed the victory and her third gold medal.

Korea A Team emerged as the Overall Champion with five gold and two bronze medals. Japan came in second with a medal haul of 2-2-2 and Singapore finished third with one gold and one bronze medal.