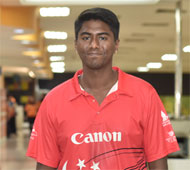 23rd October, Sitra, Jakarta: Suresh Elangovan of Singapore put in a stunning performance to crack into the top bracket of the Men’s Open Masters qualifying leaderboard to earn a bye for Stage 2 Finals of the 13th Indonesia International Open.

Defending champion and Korean pro, Jeong Tae Hwa made the top bracket in third after he also improved his total from 1417 to 1483. SEA Games Singles silver medalist, Annop Arromsaranon of Thailand, who had breifly taken third spot, slipped back down to fourth with 1483.

The Thai and the Korean will have to break the tie in a one-game roll-off for the bye. 2014 Asian Games Masters silver medalist, Wu Siu Hong of Hong Kong rounded out the top five with 1478.

Singapore’s Tay Hui Wen made the cut in seventh position with 1246 while Tracey Alyson Lin finished ninth with 1234.

Qualifying will end late this evening and the Stage 1 finals for Men’s and Women’s Open division will be held at 1.00pm local time.