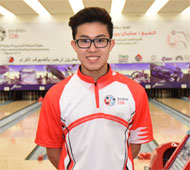 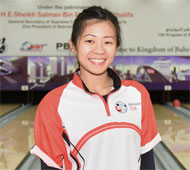 Lim’s improved effort move her into the top bracket in third with an average of 230.83 behind PBA pro, Tom Daugherty of USA in second with 231 average after taking Squad D with 1386.

Perfect gamer, Marshall Kent of USA slipped down to fourth with 2764 averaging 230.33 while Ryan Ciminelli of Cheektowaga, N.Y., who finished second to Daugherty with 1378, joined the top bracket in fifth.

Jazreel Tan’s effort in Squad B kept her in 14th position alongside team-mate, Cherie Tan in 16th position and Daphne Tan in third bracket cut at 18th position.

Joel Tan was Singapore’s best performer and only men qualifier improving his average in Squad E to 217.83 and heading the fourth bracket as the cut goes up to 215 average occupied by Rakan Al Ameeri of Kuwait.

2012 Bahrain Open champion, Osku Palermaa of Finland is off the cut in 31st position with an average of 214.67. Justin Lim of Singapore occupied 39th position and only 32 pins off the cut. Squads D, E and F will complete their second block of 6 games and the final qualifying standings will be finalised.