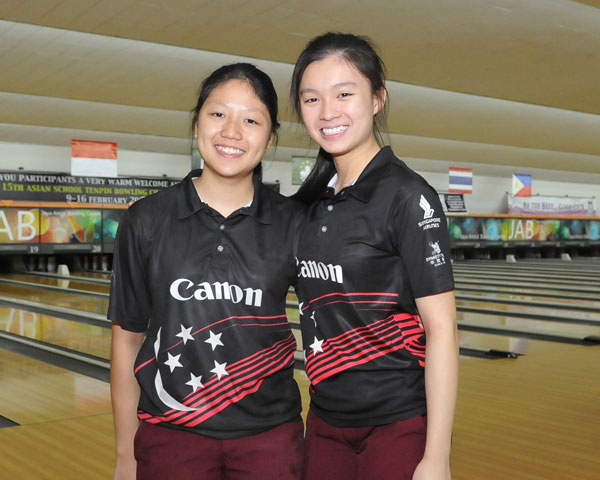 12th February, Jakarta: Kristin Quah, Charmaine Lim and Marcus Kiew made a promising start for Singapore Team A when the they ended the opening squad 15th Asian Schools Bowling Championships second and third in the Girl’s division and third in the Boy’s division.

The Japanese increased her lead to 61 pins with Quah still in second after the fifth game and Lim in third a further 6 pins away.

Despite ending the final game with 236 for Quah and 232 for Lim, Ishimoto completed the squad with 225 for the lead on a total of 1445. Quah and Lim settled for second and third with 1395 and 1385 respectively.

Nakano smashed the 2000 record of 775 set by Zulmazran Zulkifli of Malaysia with 846 in his first 3-game series. Adam Svensson of Australia A, who set the opening pace, settled for second with 1471.

Kiew, who was second after the fifth game, managed 184 in his last game to slip down to third with 1436. Takuya Miyazwa of Japan and Korea B’s Han Se Yong rounded out the top 5, who surpassed the 1400-mark.

Jonovan Neo Ze Min and Timothy Tham of Singapore B finished 10th and 17th positions with 1359 and 1235 respectively.

Squad B will take to the lanes for their 6-games Singles and the combined scores will determine the winners of the first event of the championships.