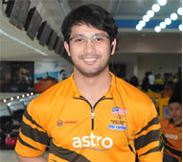 28th May, Singapore: Malaysian national bowlers stamped their mark at the on-going qualifying rounds of the 46th Singapore International Open as Zulmazran Zulkifli and Esther Cheah topped the Men’s and Women’s Open standings on Tuesday.

Zulmazran, three-time winner of the Malaysian Open in 2012, 2009 and 2008, has never made the stepladder finals of the Singapore Open thus far. After a slow start in his first two attempts, the 29-year-old eventually found his line to reel in 759 and 686 to move into pole position with 1445.

“I’ve never had the luck needed to do well here but I’m all pumped up for this time,” said Zulmazran. “There has been a lack of tournaments bowled this year and it is championships like this one that can really tuned us up.

“But doing well in the qualifying rounds don’t count much as the finals is more important. I’m determined to turn around my luck and hopefully will make the stepladder finals.”

Thai youngster, Dechochai Tinjiratip, who led briefly before the 6.00pm squad, slipped down to second after improving his 6-game tally to 1397. Malaysian sensation and 17-year-old, Rafiq Ismail took up third with 1395.

Over in the local pool, 2012 Malaysian Open first runner-up, Keith Saw stole the limelight after taking over the lead in the standings with 1396. Overnight leader, Benjamin Hong settled for second with 1353.

Keith’s brother, Howard Saw also impressed with 1348 to finish third as Basil Low and Marcus Leong completed the top 5 with 1339 and 1334 respectively.

Muhd Jaris Goh of Singapore headed the mixed pool with 1285 while the current cut at 12th position is held by Chinese Taipei’s Chen Hung-Chih with 1232.