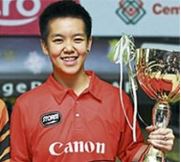 Ng, who topped the Women’s Round 2 finals with an 8-game total of 1867, needed only one match to easily beat challenger and No. 2 seed, Dayang Khairuniza of Malaysia, 255-195 to win the covented title.

“It feels good to finish the year on a high because last year I finished second here. Plus, I didn’t do well in the World Championships in Nevada, USA (August), so it feels good to win here,” said Shayna.

Khairuniza had earlier flew past fourth-seed and Round 1 leader, Yang Su Jin of Korea and Korean professional, Han Sol, 247-181-206 in the semi-finals before going down to Ng in the finals.

“I’m really happy with the win because it was something I didn’t expect could happen. The competition was very tough,” said the 21-year-old champion.

“I’ve learnt a lot from this tournament because it pushed me hard to stay on top. But it’s not over for me as I will now head to Penang for the Penang Pesta Open.”

Zulmazran earned a crack at retaining the title after he beat No. 4 seed, Kang Bo Long of Malaysia and winner of the first match, Sam Cooley of Australia, 235-224-192 in a thrilling semi-finals.