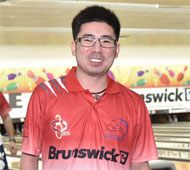 29th November, Doha: Two-time Qatar Open champion and ex-Singapore national head coach, Remy Ong made a comeback to qualify in the top bracket of the standings at the PBA-WBT #3 15th Qatar Bowling Open on Sunday.

Bowling in his second squad since arriving in Doha yesterday, Ong started off moderately with 191 in his opening game as 2014 Saudi Open champion, Marshall Kent of USA set the pace with 258.

The Singaporean picked up his pace with a superb 237 to trail the American leader by 40 pins after the second game. A stunning 279 in the third game reduced the gap between himself and Kent to just 21 pins.

Ong, displaying the form in his hay days, rolled another big game of 269 in the fourth but had to continue to trail a second American and the new leader, Cameron Weier of USA by 28 pins.

Weier ended the block with 254 and 267 to become the first qualifier to surpass the 1500-mark to top the squad with 1524. American PBA debutant, Ronnie Sparks Jr stormed home to snatch second spot with 1428.

Sparks Jr completed the top five of the top bracket while Ong finished tenth overall. A place in the top 10 spots will earn a bye and automatically advance to Step 2 finals.

With two more remaining days for qualifying and still some 20 plus American PBA pros still to arrive Doha, the cut looked set to surpass the 117 over mark.

The top 18 finishers will be joined by the ten qualifiers from the top bracket for another six games in Step 2 finals. The top four finishers will advance to Step 3 finals elimination round with the top seed meeting the fourth seed and the second seed facing the third seed over two games total pinfall.

The winners in Step 3 will meet in the championship Step 4 finals, again over two games total pinfall to determine the champion, who will pocket the top prize of US$40,000. The first runner-up take home US$20,000.

The higher seed loser in Step 3 finals will be ranked third and fourth positions respectively and pocketing US$7,000 each.

The 15th Qatar Bowling Open, a major World Bowling Tour, is the third stop of the 2016 PBA-WBT and if the champion is a PBA bowler, he/she will be awarded an international PBA title.

Photos by Terence Yaw in Doha.