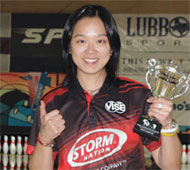 18th July, Lubbock, Texas: Jazreel Tan entered the 2015 PWBA Lubbock Sports Open hoping to prove that she and her Team Singapore teammates could compete on the big stage of the PWBA, and she did that with a dominating performance this week at South Plains Lanes.

The 25-year-old right-hander led the event through 12 games of qualifying and 16 games of round-robin match play over two long days, and she topped Team USA member Stefanie Johnson of Grand Prairie, Texas, 257-246, to claim the title and $10,000 top prize.

Tan lived nearly every bowler’s dream by stepping up in the final frame with a chance to lock up the win, and she did so, first rolling a 10 pin and then delivering a powerful second strike to seal the victory.

“Things were moving quickly, so I wasn’t totally sure of the score, but I knew I needed to get maximum score because Stefanie was striking and bowling well,” said Tan, a four-time first-team All-American at Wichita State from 2009-2013. “Every frame was a big frame, and I’m glad that 10 pin fell.”

A 6-7 split in the seventh frame, which came after four consecutive strikes, proved to be the undoing for Johnson, who downed Team USA member Danielle McEwan of Stony Point, New York (233-159) and 2011 USBC Queens champion Missy Parkin of Laguna Hills, California (213-158) on the way to the championship match.

Johnson earned $5,000 for the runner-up effort, Parkin finished third for the second consecutive week and pocketed $3,500 and McEwan earned $3,000 for her fourth-place finish.

“Bowling in college in the United States and sharing success with fellow Wichita State players, such as Tannya Roumimper, was a big step forward for international bowlers, but this being on a professional level is another big step,” Tan said.

“Hopefully, this will open the door for more bowlers from Asia to be able to come here to compete against the best. It’s a long and expensive trip for most, but I hope this helps others see the opportunities.”

This week, four of the five bowlers from Singapore were among the 16 players who made match play, and the fifth finished 17th. From here, the quintet will head to Wichita, Kansas, for next week’s PWBA Wichita Open, before heading home.

Daphne Tan finished seventh in the Matchplay finals with 6059, Shayna Ng 12th with 5902 and Cherie Tan 14th with 5820. New Hui Fen missed the cut for the finals by 15 pins after ending the second qualifying rounds in 17th position with 2,410.

Photos courtesy of PWBA and by SingaporeBowling.