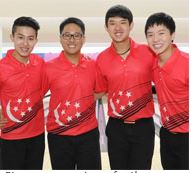 The team comprising of all debutants except for Daphne, which arrived in the capital of Incheon on June 27, took to the lanes in the third squad of the first of two days of official practice.

“Although the team is competing in these games for the first time, some of them have actually competed in quite similar level,” said Remy Ong after their first practice session.

“There has been a lot of preparation put in for this team and we believe that this will be a good platform for them to gain valuable exposure for the bigger stage.

“It is important that they can support each other well and I can see that the team spirit is high and they’re raring to go.”

Leading the charge is newly awarded Singapore Sportsboy of the Year and 2012 Asian Championships Singles gold medalist, Keith Saw. With his experience, he will be able to anchor the team.

2013 Commonwealth Championships two gold medalist, Javier Tan has also come of age after winning the Singles gold in his Asian Schools debut in Jakarta. Muhammad Jaris Goh and Joel Tan will hopefully make an impact in their debut in South Korea.

Geraldine Ng, a more senior national bowler will provide the leadership quality to her team-mate after her stella performance at Commonwealth Championships in Auckland, New Zealand this year.

Another strong medal contender is New Hui Fen, who has competed in the biggest bowling competition when she won the Team silver medal in the Guangzhou Asian Games in 2010. Adding strength to the women’s team is Bernice Lim, who has won gold medal at the 2011 Asian Championships in Abu Dhabi.

Last but not least, it will be Daphne Tan’s second appearance in the Indoor Games having participated in the 2009 Asian Indoor Games in Ho Chih Mihn City, Vietnam.

The bowlers will return to the lanes tomorrow afternoon for their second session of practice before the official games opening ceremony. Competiton will begin with the Men’s Singles on Sunday over long oil pattern.

The top 8 finishers will advance to the quarter-finals one-game shootout finals with the winners advancing to the semi-finals. The winners will proceed to the title match while the losers will earn a bronze medal each.

The women will contest their Singles on Monday, July 1 in the same format. The Doubles over short oil pattern, will be held on July 2 for the men and July 3 for the women. Again the top 8 will advance to the quarter-finals.

The Team of 4 event, to be bowled over two blocks 3 games over short/long oil pattern on July 4 and 5. The top 4 men team and top 4 women team finishers will proceed to the semi-finals shootout.

There will be no All Events and Masters finals for these games. 77 men and 54 women from twenty countries are taking part in the bowling competition.