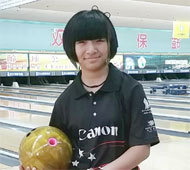 The champion had earlier dispatched third-seed, Jeong Won of Korea and Nora Lyana Natasia of Malaysia, 257-235-213 to advance to the finals. In the earlier 10-game finals, See edged Nir Syazwani Sahar of Malaysia by six pins to clinch fourth with 2254 and the final stepladder spot.

Nur Dayana, who settled for second position to pocket RM10,000, topped the finals with 2326. Joeng Won and Nora Lyana made the stepladder finals in second and third with 2313 and 2297 respectively.

Tracy See with the champion’s trophy

Rafiq had won the first match, 256-245 to force Tan to the second match but the champion bounced back for a well-deserved victory. Tah won RM25,000 as champion while Rafiq settled for RM15,000.

Rafiq had a narrow victory over third-seed, Muhammad Firdaus Idris and fourth-seed, Jordan Bunphim, 212-210-207 in another all-Malaysian affair. Tan had advanced to the stepladder finals as top seed with a 10-game earlier finals with 2475. Rafiq finished second with 2399.

Muhd Firdaus and Jordan qualified in third and fourth positions with 2360 and 2353 respectively. The best Singaporean was reigning Singapore national champion, Timothy Tham, who managed ninth with 2245.

Darren Ogn was the second best Singaporean in the boy’s division in 14th position with 2152. The Masters Finals for the adult will be held on December 6.