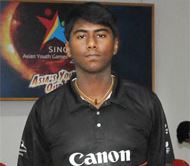 30th May, Singapore: Two-time Singapore Open Youth Masters second runner-up, Suresh Elangovan is chasing for his first victory in the 46th Singapore International Open after moving up into second spot in the Men’s Open Masters qualifying leaderboard on Thursday.

Suresh, who finished third in the Youth Boys Masters finals in the morning, leapfrog from 13th in the local pool to second after improving his lower 614 series with 671 for a 6-game aggregate of 1353.

Having had his first assignment done and dusted, he began to focus on making sure he qualified for the Open division and displayed sheer determination with his impressive qualifying round today.

Suresh trailed leader and team-mate, Keith Saw, who remained in pole position in the local pool with 1396 while Benjamin Hong slipped down to third in the table with 1353.

Zulmazran Zulkifli of Malaysia also retained in top spot in the overseas pool with 1445 followed by Dechochai Tinjiratip of Thailand in second and 17-year-old Malaysian sensation, Rafiq Ismail in third with 1397 and 1395 respectively.Several big movers in today’s highly contested qualifying rounds were Indonesia’s Rangga Yudhira in fifth with 1389, Malaysia’s Kang Bo Long in sixth with 1387, Thailand’s Surasak Manuwong in seventh with 1366.

Cheng Hsing-Chao of Chinese Taipei headed the mixed pool with 1333 while the cut in in 12th position went to Malaysia’s Adrian Ang with 1287.

Malaysian women continued to shine by occupying third to sixth positions with Filipino, Lara Posadas of Team Bowlmart in seventh and Sung Gyeoung Eun in eighth.

Three-time Collegiate Bowler of the Year and runner-up in 2011, Jazreel Tan stormed into third spot in the local pool with an improved 1328 total. Cherie Tan and New Hui Fen remained first and second with 1413 and 1362.

Kim’s team-mate, Jun Gwi-Ae topped the mixed pool with 1251 while Indonesia’s Elsa Maris Husin is the cut in 9th position with 1230.