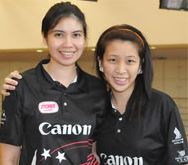 Jasmine Yeong-Nathan also made the cut sixth out of 14 in the mixed pool with 1197 to join Oh in the finals. National bowlers, Hui Tong, Julia Lam and Filomena Choi occupied the top 3 local seeded qualifiers.

Ji Eun Sol headed the mixed pool qualifying table with 1215 while the current cut at 14th position belong to China’s Qin Xiuli with 1168. With only a few squads left tonight, Jasmine is fairly safe in securing her spot in the finals.

The top 7 local women qualifiers, top 9 overseas women qualifiers and top 14 quaifiers from the mixed pool will contest the Women’s Open Masters finals over two blocks on 6 games each on 18 and 19 June.

Hong Kong’s Leo Tse headed the mixed pool with 1338 while the current cut in 19th position is held by Edmond Lo of Hong Kong with 1245.

The top 9 local men qualifiers, top 11 overseas men qualifiers and top 18 quaifiers from the mixed pool will contest the Men’s Open Masters finals over two blocks on 6 games each on 18 and 19 June.

The top 6 women and top 6 men finishers will advance to the stepladder shootout finals. The top 16 Asian men and top 16 Asian women will also qualify for the ABF Tour Macau leg which will be held on June 20.