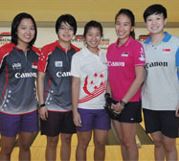 Jazreel, who was in the top 7 bracket of the qualifying leaderboard briefly, dropped down into the second bracket in 11th position after she amassed a 9-game aggregate of 2085 from 734, 696 and 655 series.

Improving her lowest series of 655 with another squad could put her back into the top bracket thus skipping two rounds and automatically into Round 4 finals. American PBA pro, Sean Rash surged into the top of the standings with 2156 after being fifth before his stunning 746 series.

Ex-Thai national youth, Phumin Klanbida, who led briefly, settled for second spot with 2150 while early pace-setter and 2013 Asian Championships gold medalist, Yannaphon Larpapharat of Thailand slipped down to third with 2145.

2013 ABF Tour Thailand leg champion, Angkana Netrviseth of Thailand took eighth position as the top local qualifier with 2062 to join the top 7 for Round 4 finals.

New Hui Fen and 2013 Indonesia Open champion, Geraldine Ng will have to contest Round 2 finals in 26th and 28th positions with 1991 and 1974 respectively.

18 qualifiers from positions 25 to 38, two additional local qualifiers in positions 39 and 40 plus two from the desperado squad will bowl 6 games in Round 2 finals on October 20.