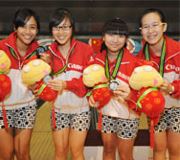 The Singapore quartet had trailed Korea after the first block of 3 games on medium oil condition earlier in the day with 2470 pinfalls to the leader’s 2547.

The girls got off the second block slightly better than the Koreans and managed to reduce the gap from 77 to 50 pins as Indonesia continued to stay behind in third.

Yeo led Tracy, Kimberly and Ilma to knock down another superb 814 to narrow the gap yet by another five pins after the fifth game. But the Korean ended the event stronger with 817 to seal their second gold medal with 4932.

Singapore earned the silver medal with 4828 after final game of 758 for a total of 4828. Indonesia remained in third position with 4745 to take home the bronze medal.

Yeo, who had a 91-pin lead over her nearest opponent, Kim Jin Sun of Korea before the start of the second block Team event, went on to register the highest 6-games series of 1394 to win the All Events to give the nation it’s first gold medal of the competition with 3859.

“I knew I had a decent margin in the All Events standings after the first block so if I can do well in the second block, I knew I would have a good chance of picking up the gold,” said the 15-year-old member of the Singapore national training squad.

“I’m also glad that my effort had helped the team to win the silver medal,” added Yeo, who won a bronze medal with Ilma in the Girl’s Doubles event yesterday.

Kim picked up the silver medal with 3724 while Hong Kong’s Joan Cheng, who posted a big game of 260 in the sixth and final game in the team event to edge Cheya Chantika of Indonesia for the bronze medal with 3673.

Yeo and Ilma were the only two Singapore girls who have qualified for the Round-robin Masters finals out of the 16 top girls in the All Events standings.

Meanwhile, Japan’s Sayato Takahira, Takuya Miyazawa, Yuhi Shinbata and Kenta Yoshida sprang an upset to beat Korea for the Boy’s Team gold with 5185. Korea took the silver medal with 5049 while Indonesia earned the bronze medal with 4987.

Marcus Leong, Alex Chong, Alexander Tan and Justin Lim ended in a disappointing 14th position with 4385 but Lim was the sole Singapore boy to make the Masters finals after finishing 16th in the Boy’s All Events with 3657.

Doubles gold medalists, Billy Muhammad Islam and Diwan Rizaldy of Indonesia won the gold and bronze medals after finishing first and third in the All Events with 3955 and 3845.

The top 16 boys and top 16 girls will contest the Round-Robin Masters finals over two blocks of 8 games tomorrow and Saturday. The top 3 boys and top 3 girls at the end of the finals will advance to the step-ladder Grand finals which will be held at Hong Kong Sports Institute Bowling Centre in Shatin on Sunday.