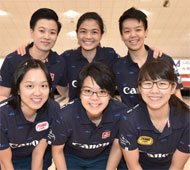 5th December, Abu Dhabi: Singapore is fielding a women’s team, which has been on a superb winning momentum this year, to the Women’s World Bowling Championships kicking off from December 7 to 14 at Khalifa International Bowling Centre.

Led by 2015 SEA Games Masters gold medalist and silver medalist in Singles and Team event, Jazreel Tan, the team will be eagerly looking to redeem themselves after a dismal showing at the 2013 World Bowling Championships in Las Vegas, USA.

Joining her is Daphne Tan, gold medalist in the Singles and silver medalist in the Trios, Team and Masters events also at the 2015 SEA Games in Singapore in June this year. Adding strength to the team are Cherie Tan, Shayna Ng, New Hui Fen and debutant, Joey Yeo.

Yeo’s big win at this year’s PBA-WBT World Bowling Open in Japan will give Team Singapore the added depth. Ex-international, Jason Yeong-Nathan and Clara Lau are the coaches accompanying the team together with Michelle Kwang as the team official.

Singapore emerged as overall champion in the women’s division at the SEA Games with 3 gold (Singles, Trios and Masters), 4 silver (SIngles, Trios, Team and Masters). The women were also successful at the 2015 Asian Championships held in Bangkok in January this year.

They came home with 2 gold (Team and All Events), 3 silver (Doubles, Trios and Masters) and 2 bronze (Doubles and Trios).

The team had several unofficial practices the past two days to get the feel of the environment. They will test the lane conditions during the official practice tomorrow, December 6. The opening ceremony will be held after that.

Competition will commence proper with the Singles on December 7 in which the top four finishers will advance to the medal shootout finals on December 9. The Trios event, divided into two blocks of three games will be contested on December 8.

The Team of 5 to be played over two blocks of three games on December 11 and 12 with the top four teams proceeding to the medal shootout finals. The top 24 based on the All Events will qualify for the Masters Finals on December 13.

Finalists will bowl six games with the All Events total score carried forward in Step 1 Finals. The Top eight will advance to the Step 2 Finals for seven round-robin matches, also with pins carried forward. A 20 pins bonus will be awarded for each win and 10 for each draw.

The top four will proceed to the medal shootout finals for the last medal of the championships. Singapore Bowling will bring you on-site daily coverage of the entrie championships.