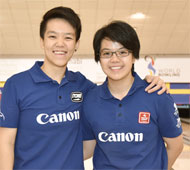 13th December, Abu Dhabi: Team Singapore ended their great run at the Women’s World Bowling Championship 2015 after missing out on the Masters semi-final despite finishing second and third in the earlier Step 1 finals in second and third.

All Events gold medalist, Shayna Ng together with Cherie Tan, New Hui Fen and Joey Yeo had qualified for the Step 1 Masters finals after finishing first, fourth, 12th and 23rd positions in the 24-games All Events standings from competing in the Singles, Doubles, Trios and 5-player Team events.

The finalists had to bowl six games with the pins carried forward from their 24-games total. Team gold medalist and All Events silver medalist, Liz Johnson of USA had taken the early lead after the first three games but Ng fought back to lead in the fourth and fifth games.

The American ended stronger in the final game to win the round with a 30-game total of 6875. Ng finished second with 6855 while Tan and Singles gold medalist, Jeon Eun Hee of Korea tied third position with 6808.

Johnson’s compatriot, Danielle McEwan, two Koreans Jung Da Wun and Son Hy Rin and Latvia’s Diana Zavjalova qualified for the next round in fifth to eighth positions. Hui Fen missed the cut by 21 pins to end her campaign in ninth with 6652.

In the Step 2 Round-robin matchplay finals with pins carried forward, Johnson got off the block brilliantly with the championship’s fourth and her second 300 in the opening match to extend her lead.

Ng continued to trail in second as the second American, McEwan moved up to third and Tan slipping behind the two Koreans, Jeon and Jung. A fifth perfect game of the championship from McEwan in the third match moved her into second as Ng slipped to third.

By the fifth match, Johnson had built up a commanding lead of 187 pins over her compatriot while Ng and Jeon shared third position. Jeon and Jung moved ahead of Ng after the sixth match which meant Ng would need to win her final match to have any chance of making the semi-final.

Both the Koreans took convincing victory to seal second and third positions with 8497 and 8476 respectively. Johnson ended in the lead with 8705 and McEwan clinched the fourth spot with 8442.

Ng lost the last match with 187 to dropped to sixth position with 8390 while Son, who finished fifth with 8394, missed the cut by 48 pins. The Masters event was the only event that Singapore had failed to make the top four semi-finals having appeared in four previous events.

Johnson bowled out compatriot, McEwan 238-213 in the all-American semi-final match and Jung edged Jeon, 208-193 in the other all-Korean semi. Jung was too strong for Johnson winning the third gold medal convincingly for Korea, 256-183 as Johnson settled for the silver.

Korea emerged as the overall champion with a medal haul of 3-2-3. USA finished second with 2-2-2 while Singapore, who had the best outing since 2005, finished third with 1 gold, 2 silver and 3 bronze medals.

Ng also became the first-ever Singaporean women to win a gold medal at the world championships since its inception. Tan and Ng won their first two medals with the silver and bronze in the Singles. The same pair together with Hui Fen added the Trios silver.

Ng and Tan also won the Doubles bronze medal and Singapore won the bronze in the 5-player Team event. The team will arrive home touching down Changi Airport at 1005 hours, December 15 on flight EY 470. Come and join us to welcome Team Singapore.