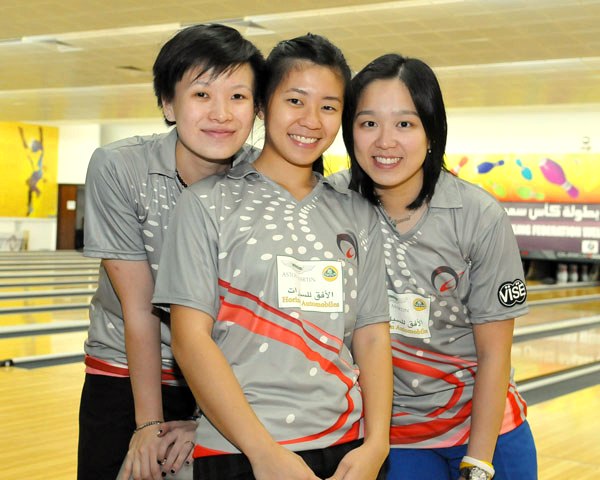 23rd February, Doha: Singapore women dominated the opening squad of the PBA-WBT #7 H.H. Emir Cup 2014 underway at Qatar International Bowling on Sunday by taking the top 5 positions in their first block qualifying round.

Bernice Lim got off to a cracking start with an opening game of 279 to lead team-mate, Daphne Tan by 12 pins and Cherie Tan, a further 8 pins away in third. The nearest non-Singaporean was 2013 Indonesia Open first runner-up, Yaqoub Al Shatti of Kuwait in fourth.

Daphne took over the running with 238 following her 267 in the opening game as Lim slipped down to second and Cherie third. Lim bounced back with 259 to regain the lead, 17 pins ahead of a fourth Singaporean, Jazreel Tan moving up to second after she rolled a stunning 279 with Daphne hanging on to third spot.

By the fourth game, Lim extended her margin at the top to 25 pins as Jazreel managed only 198 to drop down to third behind Daphne, who regained second spot.

But Jazreel fired her second 279 in the fifth and final game to leapfrog her two team-mates to win the daily high series award of US$200 and led the first block with 1262. Lim settled for secod spot with 1245, 17 pins adrift.

Geraldine Ng and Muhammad Jaris Goh finished 23rd an 24th position with 1027 and 1023 while newly-awarded Singapore Bowler of the Year and 2013 Malaysian Open champion, Shayna Ng in 29th position.

The top 28 in the qualifying standings plus top 2 Qatari youths and top 2 Qatari qualifiers outside the top 28 and four from desperado squad will make the cut. Bowlers position 7 to 36 will contest Step 1 finals over 5 games on February 27.

The top 10 finishers from Step 1 finals plus the top 6 seeded qualifiers will contest Step 2 finals over another 5 games from scratch on February 28. The top 4 will advance to the stepladder shootout finals.