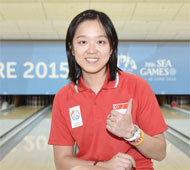 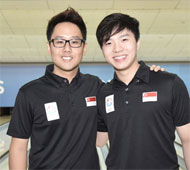 Jazreel, who led the first block with a huge margin of 152, gradually increased her margin from 161 in the opening game of the second block to as much as 191 after the 11th game. The gap was reduced by her compatriot, Shayna Ng to 105 after the 15th game and before the position-round match.

The leader topped the block with 3497 winning four out of the eight matches bowled today to advance to the stepladder finals as top seed. Shayna finished second with 3424, also winning four matches.

Tannya Roumimper of Indonesia, who was third overnight, ended up in sixth position with 3379 but will be awarded the bronze medal due to the SEA Games rule in which all three players from one NOC can advance to the stepladder finals but only two are allowed to win medals.

Shayna and Daphne will square off in the Women’s first stepladder match over one game. The winner will advance to face top seed, Jazreel while the loser will not be entitled to a medal.

The men will take to the lanes for their second block over the long oil pattern immediately after lane dressing and again the top three will qualify for the stepladder finals.