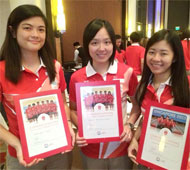 Singapore women topped the medal standings with three gold and four silver medals. Singapore men finished second with one gold, one silver and one bronze medal. The national took second spot in the overall medal tally with a haul of 5-1-4 medals.

Photos by Call The Shots Photography courtesy of SNOC.