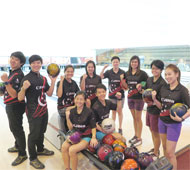 9th July, Tokyo: National bowlres comprising of two men and eight women headed to Tokyo for the world’s richest bowling event in 2015, the Bowling World Open, which has begun this morning in central Tokyo.

As part of the World Bowling Tour, the event will host the best men and women bowlers from 52 countries around the globe. Here they will join Japan’s greatest athletes to compete for a total prize pool of Japanese Yen 48,000,000 (Approx. US$390,000) and the chance to earn double ranking points in the World Bowling Tour.

Showcasing the best that bowling has to offer, the competition will be broadcast by TV Tokyo and its six network stations. With the great interest and popularity of the sport of Bowling, as well as the rising success of home grown bowling heroes, the event is expected to draw a large crowd of Japanese spectators.

In addition to these top class events, the competition will also showcase a unique exhibition series with mixed-gender teams and a section for para-bowling. Such additional classes highlight the sports accessibility.

This year’s Bowling World Open event will take place in the State of the art Minamisuma Bowling Arena in the Shinagawa Prince Hotel and the Makuhari Messe that will have a temporary lane construction built-in to the extraordinary convention centre to house the main portion of the tournament.