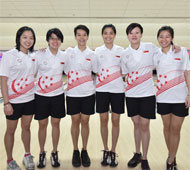 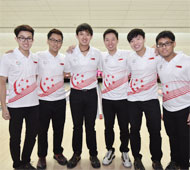 7th June, Singapore: Team Singapore are all set to do battle with six other nations from the South East Asian region when the 28th SEA Games Bowling Championship gets underway on Tuesday at Orchid Bowl @ Ochird Country Club.
Team officials from Indonesia, Malaysia, Myanmar, Philippines, Thailand, Vietnam and host nation, Singapore met at the managers’ meeting held at the Orchid Country Club confirming their players for the games to run from June 9 to 14.
Six nations sent their full men team except Vietnam with only five men while five nations sent their full women team with the exception of Vietnam with only four women. A total of 41 men and 34 women players will take to the lanes later today for their first day of official practice.
The second day of practice will be held tomorrow. Dr Danny Santos, technical delegate welcomed the team officials before kicking off the meeting covering all aspects of the games.
Mr Doug Dukes from Kegel Company Inc. is the technical official responsible for lane maintenance. He also briefed the official present regarding the long and medium oil patterns which will be used for the championship.
Thereafter, Mr Kyohei Akagi, Honorary Life President of WTBA and a member of the Jury of Appeal, assisted Dr Santos in the lane draw. Ms Suwalai Satrulee, Vice President of ABF and secretary general of Thai Tenpin Bowling Association and ex-international Ms Grace Young are the other two members of the Jury of Appeal appointed.
The players will compete in the Singles, Doubles, Trios, 5-player Team and Masters finals. The nations will battle for medals in five events. No medals will be awarded for the All Events although the top 16 men and top 16 women based on their standings will advance to the Masters finals.
A country cannot win all three medals and the fourth-placed player in the Singles and fourth-place pair Doubles will inherit the bronze. However, the top 3 men and top 3 women in the Masters finals can advance to the stepladder finals but the third-placed finisher will not be awarded the bronze. The fourth-placed finisher will earn the bronze instead.
The women team of Bernice Lim, Cherie Tan, Daphne Tan, New Hui Fen, Shayna Ng an four-time Collegiate Bowler of the Year, Jazreel Tan are all season campaigners and is one of the favourite teams for the 5-player team event.
Together, they have won gold medals in the Doubles, Trios and 5-player Team at both the South East Asian Games and the Asian Games. “Although there will be mounting pressure on home ground, the team are well prepared,” said head coach, Remy Ong.
Over at the men’s side, ony Keith Saw has taken part in the previous SEA Games in Jakarta, Indonesia in 2011. All the other five men representatives – Howard Saw, Javier Tan, Joel Tan, Justin Lim and Muhammad Jaris Goh are all debutants.
But some of the men have taken part in last year’s 2014 Incheon Asian Games and this year’s 23rd Asian Championships in Bangkok. However, three members of the team did win this year’s Asian Youth Team gold in Macau, China.
Competition will commence with the Singles on June 9 culminating with the stepladder finals of the Masters on June 14.
Photos by Terence Yaw in Singapore.