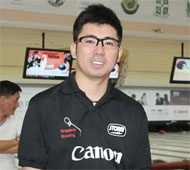 Ong, 36 will take the lead in the National Bowling Team for both female and male. The appointment marked an important leap as SingaporeBowling continue its efforts to groom more emerging bowlers to rise up to the world podium.

It also marks a new career path for Ong, who has made significant contributions to Singapore over the past 19 years of his illustrious bowling career. Ong’s years of experience in competition, is an invaluable asset to the team of coaches.

He will be able to relate well to our bowlers and provide his invaluable insight to our team. His wealth of international competition experience and knowledge, it will undoubtedly place him as one of Singapore’s best coaches, if not the best.

During the Lunar New Year dinner later that evening, SingaporeBowling named 2012 World Cup champion and 2013 PBA-World Bowling Tour DHC-IBC champion, Shayna Ng as SBF Bowler of the Year for her outstanding performances in 2013.

In addition, Muhammad Jaris Goh was awarded as SBF Youth Bowler of the Year 2013. Current National Head Coach Henry Tan was awarded in recognition for his outstanding contribution to the Sport of Tenpin Bowling.

Check out the Photo Album.