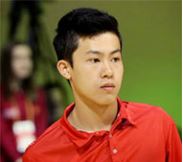 Two-time World Cup champion and last year’s runner-up, Aumi Guerra of Dominican Republic rounded out the top 5 with 1374. Apart from the Canadian’s 1500 series, two surpassed the 1400-mark and 13 pass the 1300-mark.

After the first block, Helga Di Benedetto of Italy and Nataliya Shcherbinina of Ukraine occupied 23rd and 24th position with 1244 and 1230.

William Ching of Venezuela finished second with 1495 while the top Asian men was Philippines’ Benshir Layoso, who took third spot with 1479. Vincent Cayez of France and 2013 World Championship silver medalist, Bodo Konieczny of Germany completed the top 5 with 1468.

64 women and 74 men from 76 countries are competing in this year’s championship, the lowest number since the 1998 World Cup in Kobe, Japan. The women and men will bowl a total of four blocks.