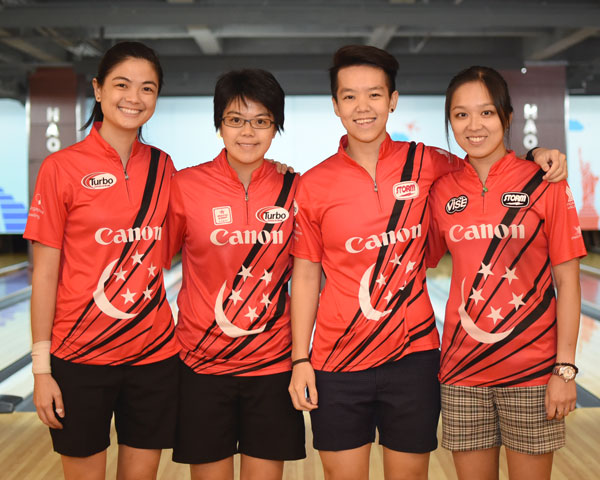 Ng knocked downed a five-game total of 1060 to finish second in the overseas pool behind leader, Tannya Roumimper of Indonesia in the lead with 1083. 2016 Asian Championships Team bronze medallist, Daphne Tan took third position with 1038.

2016 PWBA Storm Sacramento Open champion, Cherie Tan headed the mixed pool with 1026 followed by Jazreel Tan with 995. The top three overseas qualifiers will earn a bye and automatically qualify for Round 2 final.

Li Aijun topped the local pool with 1065 ahead of compatriots, Zhang Chunli in second with 1013 and Sun Jinfeng third with 996. The top three local qualifiers will also automatically qualify for Round 2 final.

Qualifiers in the mixed pool from positions 7 to 30 will contest the six-games Round 1 final on October 11. The top 12 finishers in Round 1 together with the top three overseas and top three local seeded qualifiers will bowl another six games in Round 2. The top six will advance to the stepladder finals on October 12.

Meanwhile, ex-national head coach, Remy Ong competing in the Men’s Open division as a member of Team Syntech together with three team-mates, topped the overseas pool with an impressive 1146 after the first block of five games.

A second Indonesian, Ryan Lalisang completed the top five with 1042. The top five overseas qualifiers will automatically qualify for Round 2 final.

Impressive run in the first block for Remy Ong

The top five local qualifiers will also earn a bye and automatically qualify for Round 2 final. 2016 Asian Championships triple gold medallist, Michael Mak of Hong Kong headed the mixed pool with 1025. Qualifiers from the mixed pool positioned 11 to 42 will contest Round 1 final on October 11.

The top 20 finishers together with the top five overseas and top five local seeded qualifiers will bowl another six games in Round 2 on October 12. The top six will advance to the stepladder final.