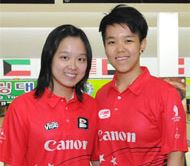 Jazreel Tan managed 1758 despite posting a lowly 515 series to add to her two other series of 643 and 600 to take up seventh behind two Taiwanese, Tsai Hsin Yi and Chen Hsiu Lan in fifth ans sixth.

2012 World Youth Team bronze medalist, Kim Ga Ram of Guk Seong City registered the highest 3-game series of the tournament with her stunning 803 at the 3.00pm squad to share the lead with Ka Yun Mi on 2105 in local pool.

Kim Ho Jeong of KPBA dropped to third with 2059 while the current cut in 15th position went to Korean national team member, Baek Seung Ja on 1999. Current cut for the women’s division stood at 1958 and is held by Kim Yeong Suk of Korea.

The top 15 local women qualifiers, top 10 overseas women qualifiers and top 20 qualifiers from the mixed pool (total 45) will contest the 9-games finals on July 11 with the top 3 advancing to the TV Shootout finals.

Ashok Akaash Kumar of India, who was at the 4th Asian Indoor & Martial Games last week, won himself a Hammer bowling ball by scoring the highest series in the first squad this morning with 742.

His new total of 2067 earned him second in the table. Chinese Taipei’s Huang Teng Wei did well to take up third spot with 1998.

Singapore’s Ng Chiew Pang and Ng Tiac Pin made the cut for the finals in 13th and 17th positions with 1802 and 1765 respectively. There were 30 slots in last year’s format but has been reduce to 20.

The cut at 20th position last year was 1835 so both the Singaporeans will have tomorrow’s final day of qualifying to improved their scores to secure their places in the finals.

There were changes atop the local pool with ex-international, Lee Ik Kyu of Korea retaining top spot with 2223 followed by Kim Young Pyo and Park Kyung Shin of KPBA second and third with 2199 and 2168 respectively.

Jeong Tae Hwa of KPBA and former member of the PBA Tour headed the mixed pool with 2031 while the cut at the bottom of this pool went to Lee Chi Song of Korea with 1955.

The top 40 local men qualifiers, top 20 overseas men qualifiers and top 59 qualifiers from the mixed pool including defending champion, Hong Hae Sol of Korea (total 120) will contest two rounds of 8 games finals on July 11 and 12 with the top 4 advancing to the TV Shootout finals.

The 2013 It’s Daejeon International Open Bowling Tournament is the eighth stop in this year’s PBA-WBT World Bowling Tour and with prize money well over 215 million Korean won (approx. US$190,000), it has been classified as a Major PBA-WBT tournament.