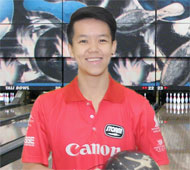 12th January, Helsinki: 2013 Sportwomen of the Year, Shayna Ng ended the PBA-WBT #6 45th Brunswick Ballmaster Open 2015 in sixth position as the sole women in the field of 16 Round-Robin finals.

Ng got off to a superb start in the second block of the Round-Robin finals winning her first four matches with 207, 244, 249 and 223 but suffered a major setback after losing her next two matches with 177 and 184.

Despite winning her final and 15th match with 215, her total of 1705, which included an 8-pin handicap competing against the men, adding her first block of 1925 for a grand total of 3630 put her in sixth position.

Ng had displayed determination after qualifying second overall with a 6-game qualifying scores of 1437 behind 2014 World Youth Masters champion, Jesper Svensson of Sweden in pole position.