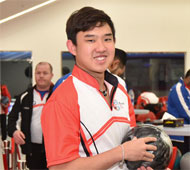 Jazreel, Bernice, Muhammad Jaris and Cherie earned one bye to advance automatically to Round 3 finals in 14th, 16th, 17th and 18th positions respectively while Hui Fen will contest the Round 2 finals after qualifying in 21st position.

Squad E leader, Tom Daugherty of USA headed the second bracket with two byes into Round 4 finals. Martin Larsen of Sweden was the cut in 12th position.

Squad F leader and 2012 champion, Osku Palermaa of Finland headed the third bracket with one bye into Round 3 finals together with four Singaporean qualifiers.

Christopher Sloan of Ireland headed the fourth bracket in 19th position alongside Hui Fen in 21st position. American PBA pro, Brad Angelo of Lockport, NY took the 27th and last spot of the qualifying table 2549 from an almost perfect game in the 11th game of 299.

Mohammed Janahi and Abdulla A. Karim earned the 28 and 29 spots reserved for Bahrainis. Missy Parkin of USA was the top women qualifier outside the top 27 with 2546 and was awarded position 30 while Daphne Tan of Singapore missed the cut in 32nd position by 4 pins.

The top 3 will make the cut for the stepladder finals. The second and third seed will square off in the semi-final over one match. The winner will challenge the top seed in the final on a beat-twice format for the title.