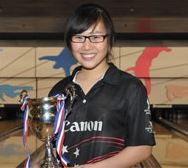 Fifth seed and defending champion, Esther Cheah of Malaysia eliminated Yeo and See, 210-185-148 in the first match to advance to face second seed, Chan Shuk Han of Hong Kong and Ilma in the second match.

Cheah ousted Chan and Ilma, 201-181-178 to face top seed, Ooi in the championship match. Both the contenders were locked together up to the seventh frame when Ooi had an unlucky split.

The Singapore youngster had another split in the ninth frame and opened the last frame to go down 156-193 forcing a second deciding match.

Although Ooi opened in the first frame, she struck twice in the fourth and fifth frames but her challenger got off the mark better with three strikes in a row.

The Malaysian did have an opened frame in the fifth but rolled another turkey while Ooi had a split in the eighth frame. Cheah successfully retained the women’s title beating Ooi, 220-193.

“It was a close first match but I made two poor errors to allow my opponent to win the match,” said the 18-year-old Kimberly Ooi. “I just didn’t have the luck to win my first international title.

“But I’ll take this important experience with me and will work harder for my next tournament.”

The champion, who trailed Hussain before the last game, snatched top spot after finishing with 242 in the final game of the Stage 2 finals. Hussain finished second with 2187 and Shaker third with 2145.

Lee, Jassim and Frawley made the stepladder finals in fourth to sixth positions with 2129, 2121 and 2098 respectively.