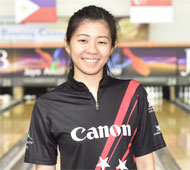 The defending chanpion made her intentions known after she stormed into the lead with 1425 effortlessly. At just aged 24, she has won the Indonesia Open twice and will be gunning for her third victory.

Alisha Iman Cheong of Malaysia improved her score with a superb 709 to add to her 684 for a total of 1393 moving her up to second while 2014 ABF Tour TOC winner, Chan Shuk Han of Hong Kong finished third with 1273.

Macau’s Hui Tong, who led the standings yesterday, slipped to fourth with 1271 followed by a second Hong Kong national, Milki Ng completing the top five with 1250.

In the local pool, Nadia Pramanik surpised her more experienced team-mates by topping the standings with 1381. Two-time champion, Sharon Limansantoso also improved to take up second with 1372 while Putty Armein finished third with 1365.

Over in the Men’s Open division, Hong Kong’s Michael Mak and Wu Siu Hong finished one-two with 1537 and 1478 respectively. Kim Bolleby of Thailand downed a stunning 791 to move up to third with 1472.

Early leader and SEA Games Singles silver medalist, Annop Arromsaranon of Thailand was knocked off the top three into fourth position with 1439 as Timmy Tan of Malaysia rounded out the top five with 1429.

2015 Asian Championships Masters gold medalist, Ryan Lalisang of Indonesia placed himself as the firm title contender after topping the Men’s Open local pool. The 30-year-old Indonesian, who has yet to win the Men’s title on home soil, downed a stunning a three-game series of 783 to add to his second best three-game series of 677 for a total of 1460.

Lalisang will automatically qualify for Stage 2 Masters finals on Sunday after his superb effort. Joining him in second was ex-national and 2011 SEA Games Team bronze medalist, Oscar with 1421.

The top 18 after the 8 games Stage 1 finals will advance to Stage 2 finals joined by the top 3 local and top 3 overseas seeded qualifiers for another 8 games on October 25.

The top 15 after the 8 games Stage 1 finals will advance to Stage 2 finals joined by the top 3 local and top 3 overseas seeded qualifiers for another 8 games on October 25. Qualifying will end on October 23.